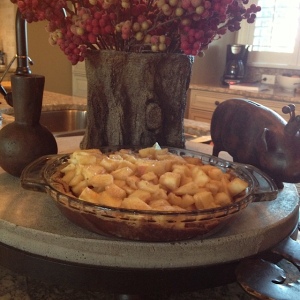 Yesterday I finally made a Raw Apple Pie.  I hadn’t made it in years, so yesterday I pulled out the recipe which I got from a friend, Heather Winea, made a few changes (as usual), and it turned out great.  It’s so healthy, I actually served it for lunch to my family!  Play around with the recipe yourself and see what you come up with – but here is the basic recipe:

Put the pecans in a food processor or VitaMix and blend.  Then add the dates, vanilla and cinnamon.  If it needs a little moisture, you can add apple cider or apple juice (maybe 1 tsp. or so).  Spread the crust into a pie dish.

5-6 apples cut into cubes (whatever size you like), you can keep the skin on if it’s organic, if not, I would peel them

Cut up the apples and put in a large bowl.  Then put 1 apple, a few shakes of cinnamon, maybe some nutmeg, and 4-5 dates in the food processor or VitaMix and blend.  Add 1 Tbsp. psyllium at the end along with a little apple cider or juice (about 1 Tbsp.) and blend some more.  Let that set for a couple of minutes and then add it to the bowl with the cut up apples and stir everything together.  Spread it into the pie crust and it is ready to serve.  Store leftovers in the refrigerator for a few days.

Note:  As it is written above, the recipe is raw.  The last time I made the recipe, I put too much apple cider in the crust and I needed to make it more firm (and was out of pecans), so I baked it in the oven at 300 for about 15 minutes or so.  You could do this at just below 200 degrees and it would still be raw, but at 300 degrees, it is no longer raw (but still good!).